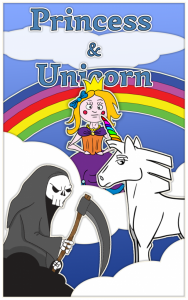 So, you worked on a project?

Yea, so I recently started the project Princess and Unicorn, with the clear goal of making something that should not take more than 1 month to create, and the main purpose of the game was to investigate how to implement all the necessary features that would make it possible to make some revenue. It was never intended to be a fun game, and as such I asked my youngest son what kinda game he would like, and of course he was all like “I want a game with Princesses, Unicorns and Angles”, so I began making a simple game about Unicorns and Princesses

It turned out to be a bit of a bigger hazzle to create something simple, and for some reason, instead of one month, it became a four month project. There was things along the road that did not work, and stuff that suddenly stopped working, and the game became at various stages unplayable. On top of all of these challenges, I became victim to “polish creeping”, meaning that every time I fixed a small thing, I got new ideas to improvements that would make the game a little bit more fun to play, but this was never the intent of the game.

So in the end I found myself  creating issues that I needed to fix before I could release it, adding to the pile of things that needed fixing and improving.

In the end I realized that I had to kill of the feature creeping and get on with it, I had reached my goal a couple of months before, but had for some reason keept on working.

So, post mortems should always contain some questions that should be answered.

What was the initial plan?

The initial plan was to make a small and simple game that could be put on the Google store, in a manner where I could make some money. There was no other agenda, the game did not have to be good, in fact, I choose an idea that was mediocre so that it was something that I would not get too attached to, and something that I could end off when I have reached my goal. As well as investigating how to get money through the Google Store, I also wanted to get statistics, so that I could improve my game. I would also have liked to create this in the apple store – but this was not a requirement, and was something that I would like to do, if everything went right.

I really reached my goals. I did not complete the “release on itunes store” goal, but since it was a goal that could be completed if I had time, it was not a big problem. I learned so much about the whole add integration, Google play integration, and all of these things that makes up a modern game on the phone. So all in all, I reached all the important goals, and I learned a lot.

Time, that was the biggest factor. As I set out, I planned on using only one month, but for some reason, this turned into four months, which is WAY to much in terms of planning. This have been hurting me really bad, because it feels like i wasted so much time on small things. I guess the devil is in the detail, and I used much time on trying to balance and make the game fun. I believe that I have succeeded, and the game is actually quite fun, but not compared to the time I used to create it.

What will I do different next time?

I guess the biggest lesson from this project is that no matter what I do, I should use more time engaging in a project that have potential to become something, so that I do not waste my time and energy, working on projects that would never become something anyways. The next couple of projects should be something that I believe is worth investing in from a business perspective.

Secondary, I need to create just a vague plan, so that I have a general idea of how long things will take. This project was very much planned in half an hours and estimated in that same period – I need to use more time planning, and figuring out what I need to do in order to complete the project. Mainly because I do not want to end up in a situation where things pops up all the time. New things that I did not anticipate – this should absolutely help prevent that an estimation of 1 month becomes 4.