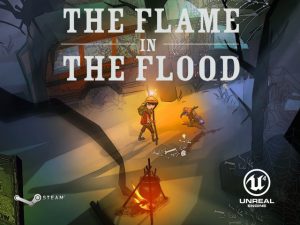 So, here comes my first review of a game that I bought recently and played a bit, I wont say that I played it much, because it was to frustrating when I died. I am not really a big fan of the pop expression “rouge like” but I think  this is what best describe the core gameplay of this game.

The flame in the flood is a game about a girl and her dog that is traveling down a river on a raft in search of something undefined (that at least was how I experienced it) There is no other story, other than surviving.

The main mechanic of the game, is survival, you raft down the river entering different locations in search for food and parts to improve your survival skills. At each location there is dangers in form of animals or poisonous plants that will kill you if you are not carefull enough. If you die, there is points along the river where your progress is saved, however, if a savepoint is made at a moment where you are really screwed, you basically have to start all over again, or go to a previous savepoint, but since the savepoints are so far apart (it can be over an hour of play before it makes a savepoint, and this is what makes it a “rougelike” game from my point of view)

Very nice, and well integrated, it runs around barking at things that needs your attention, however, the barking is a bit too much, and the “important” barks drowns in the everlasting barking at everything.  Sometimes, the dog will go close to a place of importance and stand and bark at whatever is important – this part actually works really well – I have had numerous encounters with snakes where the dog saved me because the snake was hidden behind a car or similar. 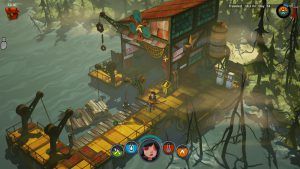 The raft is a kind of a mini game by itself. It gets broken over time if you are not good at avoiding obstacles in the river, and you have to enter special workshops to get it repaired. The raft is one of the places where you can get stuck at a save point at very low health, and it will be almost impossible to recover, and you will end up having to start from a previous point. 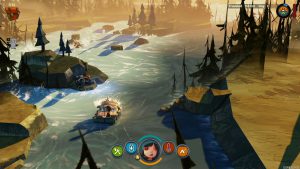 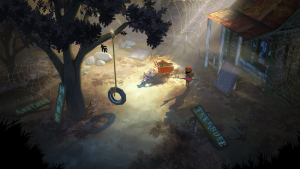 Every time you enter a location, there will be random loot scattered around the area, this seems to work good at a first glance, however, since the environment is so deadly, it can sometimes be fatal, and you will have no chance to recover, no matter how good you have become at the game, because, you do not have any control over what you find when you enter these environment, I have died of thirst on several occasions, simply because, I was so unlucky that I was unable to find anything to drink or eat. I believe it would be an improvement if there was a way, where the game was less random when it came to delivering things that will make the game playable, and not so luck based, that you as a player feel out of control of the situation.